As snot oozes from the noses of little boys and girls across Australia at this time of year, parents and carers cringe at the unsightly cold and flu symptoms, but expect recovery to be relatively fast. This story is a reminder that cold and flu symptoms need to be closely monitored – there may be something else lurking in the background.

Have you ever wanted to run away from a fearful situation but you know you can’t? That was pretty much what happened to me when I was forced to restrain my two-year-old daughter while the anaesthetist put her to sleep.

It’s the hardest thing I’ve ever had to do since becoming a mum, and the hurt I felt at seeing her suffer was more than just emotional; it was physical as well.

My hand, which was pressing her little forehead down on the operating table, shook, while my other hand, which was clutching her struggling wrists, was so sweaty that she almost slipped from my grip. There was a hot, sharp pain in my throat and my tongue seemed to stick to my teeth as I told her that I loved her and that everything would be okay. Guilt and worry squeezed my heart: Why is this taking so long? If only I’d acted sooner. What if the scalpel slips? Sounds of metal and electronic beeping and the gas mask hissing filled the theatre but my ears only managed to hear her screams. Then, finally, my vision blurred, as the sedative flowed into her tiny veins and I witnessed the moment her struggling stopped, but I could still see the terror in her eyes.

To be a parent is to expect the unexpected, you hear that all the time. But no one tells you that raising children is like living on a fault line. You can stock an emergency survival kit and write out a plan for when the earthquake hits. But the moment the ground actually shakes will still catch you off guard. And it wasn’t until I was in the paediatric intensive care unit, cradling my critically ill toddler, that I realised I should have seen the signs.

It began as a cold like any other ordinary cold: first the tell-tale sneezing, then the runny nose. It was something I’d become well and truly used to ever since she started attending day care and I did what I always did to try and ease her symptoms. I fed her buttered toast soldiers with the crusts cut off along with warm apple sauce and spoonfuls of lactose-free yoghurt. I kept her warm with extra layers and vigilantly gave her carefully measured doses of Children’s Panadol whenever her temperature went above 37.5 °C.

But her cold did not improve. Her appetite petered off, she grew listless, and, most worryingly, her voice began to sound muffled like she had marbles in her mouth. When her fever spiked at 40°C I finally panicked and took her into casualty.

It was a busy Monday night and we had to wait a couple of hours. When the paediatric registrar finally got to us he took a quick look in her ears and mouth and said she just had a viral sore throat. She didn’t even need antibiotics. My first reaction: relief. She wasn’t going to die. My second: doubt. Was it really just a viral sore throat? Sure, her tonsils were inflamed. But I’d never seen her this unwell. I looked down at my daughter again. Pasty lips, drooling mouth. And I wondered what made him so sure.

This was a decision I came to bitterly regret when, four days later, I found myself back in casualty, listening to an ear, nose and throat specialist explain to me that my daughter had a large, life-threatening neck abscess that had to be drained straight away. It needed to be done while she was still able to breathe and there was a risk of damage to her facial nerves which could result in permanent facial paralysis and speech impairment.

I can’t recall everything that happened from moment to moment while my daughter was in hospital, but I can measure our time in events: Being rolled on a gurney towards theatre while my daughter sat on my lap, clutching her favourite doll; sitting silently in the corner of the waiting room, trying not to cry, while I imagined the scalpel blade piercing her throat; seeing her intubated and unconscious in paediatric intensive care, lines running from her body like a spider web; then, after she was awake and extubated, uttering useless words of comfort while she screamed as they wrapped her tightly in a blanket – effectively a strait jacket – so they could force a feeding tube down her nose.

The six days we spent afterwards in the children’s ward blended into a blurry haze of nurses’ checks, doctors’ rounds, beeping alarms, hospital food and torn out IVs, but when I look back on that week, when I try to make some sense of it all, the first thing that keeps coming to my mind is: Why didn’t I trust my instincts?

It’s a thought that has tortured me. I wasn’t assertive enough. Why didn’t I insist on a second opinion? I should have brought her back to casualty sooner. We could have avoided surgery if I’d demanded she be given antibiotics at our first emergency visit.

My friends tell me not to beat myself up. I’m not a doctor. I had no way of knowing that a deadly bacteria – known as Fusobacterium necroforum – had formed an abscess in my daughter’s throat. But I can’t stop the voice inside my head, soft and persistently accusing: You knew it was more than just a viral infection. 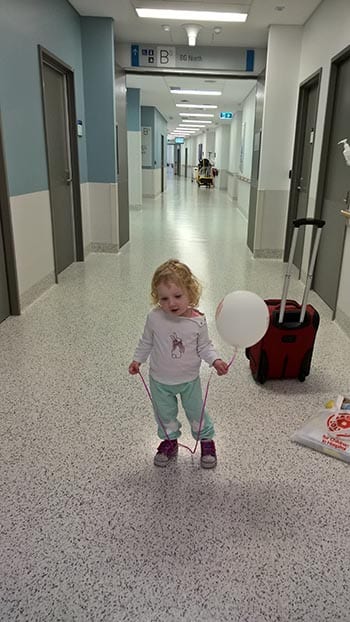 When you take your child home after spending six days in hospital, the life that you left behind feels trivial. Rather than celebrating, you find yourself trying to reclaim those pieces of yourself that you lost somewhere between the operating room and the hospital’s corridors.

You constantly watch your child. You try to salvage any smidgen of self-confidence you might have as a parent and try to accept that you made a mistake. But every time you make a decision you can’t stop the gnawing thought that maybe you’ve made the wrong call.

I used to believe that raising a child was going to be the most joy-filled time of my life. And it has been, a lot of the time. But here’s the truth: parenting is also painful. Caring for your child – feeling their hurt when they hurt themselves and kissing their tears when their tears flow – is painful. Loving them till your heart aches is painful.

And as much I’d like to believe there’s a formula for raising happy, healthy kids, I’ve come to realise that there are no set of guidelines and no universal rule book. All we can do, in the end, is learn to listen to ourselves. Because somewhere, between what you think you should do and what you actually end up doing, is a quiet space where our perceptions form and our intuition finds its voice.

We’re not always going to be right. But it’s our responsibility as parents to take note of that voice, to have faith in ourselves, and to act according to our instinct.

My daughter is all better now. The other day we were looking at the little photo booklet that I made of her hospital ‘adventure’. We came across a picture of her on the bed, with her IV snaking from her bandaged hand and a plastic bracelet circling her ankle.

‘You slept a lot,’ I said, and took her gently in my lap.

She sat there looking at the photos. I watched her flip to the one at the end. The one where she’s standing in the hospital corridor in front of her little red suitcase, white balloon in hand, ready to come home.

‘You were very brave,’ I said.

Leave a reply Click here to cancel the reply

Our little people are learning how to be a grown-up

By Suvi Mahonen / No Comments

E is for Education: The right of every child

By Jessica Schumann / No Comments